Published in the January 1969 issue of Creative Camera magazine was a major portfolio of Robert Frank’s photographs from his seminal work ‘The Americans‘. This was done to mark the publication of the second edition of the book, which was already described in the magazine as “the most famous photo-essay ever produced” and “An essential book for every photographer.”
Like the majority of photographers, regardless of interest in any particular genre, I was impressed by Frank’s work.

In a few of the following issues of Creative Camera magazine during 1969, Bill Jay, the then editor and close friend of Frank, published a series of short articles that Frank had written in the form of ‘Letters from America’. There were only a handful published, erratically, during that year and I have never seen them referenced anywhere else.

They contained Frank’s thoughts on art, film and photography. Each was always signed:

Here is the first, published in June 1969, Creative Camera Issue 60:

Dear Bill,
Ten or twelve years ago I lived across a courtyard from Bill de Kooning. I could see him from my window; I’d see him with his hands behind his back, his head bent, pacing up and down the length of his studio.

I could see the easel standing there and I’d wonder if he ever would get to paint and stop walking up and down. Quite often I think of that image now. That was the time when I was a photographer, doing jobs or going out on my own to photograph in the streets. Then it seemed to me I was making a big effort. Now thinking of de Kooning, I understand better what it is, to face a white sheet or canvas; to face something which does not respond to my movements, all will have to come from inside me. No help looking through the viewfinder and choosing the Decisive Moment. That’s where it starts, the difference between doing stills and doing a film. I find it very difficult to organise, to control and to discipline my thinking before I step into the doing of it. I feel a filmmaker must express first what he feels-what’s happening to him.

It took me years to understand that and some courage to really try to do it. And that’s where I am with my last film: Me and my Brother.

About this film: The world of which I am a part includes Julius Orlovsky. Julius is a catatonic, a silent man; he is released from a state institution in the care of his brother Peter. Sounds and images pass him and no reaction comes from him. In the course of the film he becomes like all the other people in front of my camera – an actor. At times most of us are silently acting because it would be too painful not to act and too cruel to talk of the truth which exists … I don’t want to talk more about my film now, I hope it will soon be shown in London.

In Paris I saw a film by Jaques Rivette : L’Amour Fou. I think the film is a masterpiece. Sitting in the cinema, watching the film I felt simply that it was all true: the Terror and the Beauty and the need for Love. It was as true for me as it is for Rivette and a young girl sitting next to me – and me knowing nothing about her – I’m looking at her face when the lights go on and I know that she is moved by what Rivette has told about himself and his world. That’s Art! The film was shown in two versions. A four hour version which corresponds to Rivette’s idea, a two hour version which represents what the distributor wants. I found that the additional two hours did not add a great deal to the story.

In London I also looked at Anderson’s ‘If’. It’s good entertainment and it’s well done. It’s English and it’s not original and it’s in the trend of today’s slogan: “revolution “. And I didn’t believe it. He used too many of Goddard’s ideas and I realised the hang up of the English on those boarding schools must be for real. The scene where the boy meets girl behind the counter and they both become tigers and make love, that was very good, but after all it was all said with poetry and with feeling in Vigo’s ‘Zero de Conduite’.

I don’t really know why I’m going to put down Helen Frankenthaler, a New York painter who is going to have a big show at the Whitney Museum in NY. This is how it happens: I am at the printers where The Americans is being reprinted. There, on another press, the catalogue for Frankenthaler’s show is run off. The paintings look at me and I look at them: a cold fury comes over me, what white emptiness, what meaningless elegance, what indulgence into TASTE and intellectual snobbery. What makes a show like Frankenthaler’s possible is Power and Money; and that, especially the latter, is the mark of success upon which the system insists – Art or business or anything. That’s the way it is in America…true but sad.

Acknowledgement is due to Robert Frank, the original author, and to whoever now may own the copyright on the long-gone Creative Camera magazine. This article is reproduced here solely for archival research purposes.

Reproduced below are the five double spreads from Creative Camera Issue 55, January 1969, showing selections from Robert Frank’s ‘The Americans’. 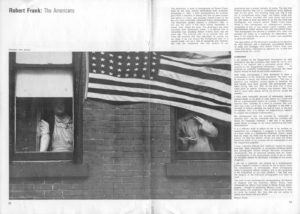 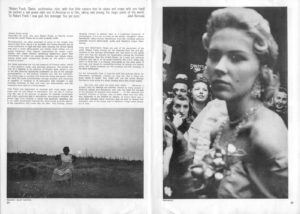 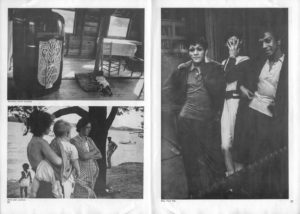 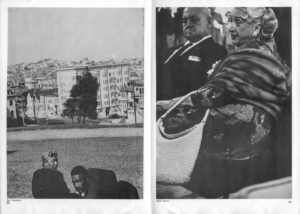 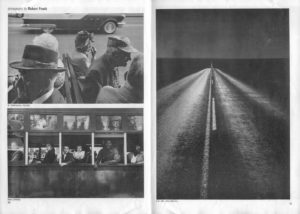