The Cambridge Darkroom was formally constituted as a company limited by guarantee on 11th January 1984. The objects for which the company was established were stated as:

‘to further and advance the education of the public in the art of photography and to promote public knowledge, appreciation and understanding thereof.’

To achieve this it was ’empowered’ to mount exhibitions, collect photographic works, promote photography and provide public facilities for the pursuit of photography. The journey began.

The team that brought the Cambridge Darkroom to fruition where Mark Lumley, Pavel Büchler, Roy Hammans and Brian Human. The founding directors of the company were Roy Hammans, Brian Human, Colen Lumley, Peter Soar and Edward Wright. Colen Lumley, an architect, advised on the design of the gallery space and Peter Soar, a local solicitor, provided legal advice and services – both had an active interest in photography and were keen supporters of the venture. Edward Wright brought his wealth of experience in design and teaching to the mix. The ‘board of directors’ met the legal requirements for a limited company and managed the company affairs.

The Cambridge Darkroom Gallery opened on the first floor of Dales Brewery on 20th January 1984, with Mark Lumley as Director and Pavel Büchler as Co-Director. The Gallery Director and Co-director were the public face of the Darkroom; it was Mark and Pavel’s job to formulate and manage the programme – and to sustain it. The premises comprised 132 sq m of main gallery space, a spacious entrance stairway with room for small exhibitions, two darkrooms for processing and printing, a layout/office area and a reception/sales desk.

Pavel Büchler’s distinctive typography and design skills brought a fresh look to the Darkroom’s branding and publicity material, including the catalogue for the opening exhibition, Autographs, described in the programme as:

‘…the first major show to be produced by the Cambridge Darkroom. 43 artists out of the 70 British photographers invited have contributed with a piece of work that they consider best reveals their identity. The pictures in the show are often self-portraits but equally often they are not, they are autographs. Many of the photographs were specially created for this exhibition and are shown for the first time.’


During its first year as a publicly-funded gallery the Darkroom set an exceptionally high standard with a programme that included:

This programme set the tone for the next five years – the Darkroom was well on its way to becoming the photographic hub of Eastern England. 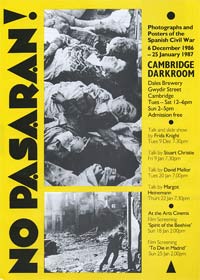 Group and thematic exhibitions initiated by the Darkroom included Revisions, Fen Archive, Next: Tomorrow (with Kettle’s Yard, Cambridge), Boundaries (the first Darkroom Bursary Show, 1987), Figures, Death (with Kettle’s Yard) and Shifting Focus (with Kettle’s Yard). Other thematic shows included Tierra y Libertad, No Pasaran, Remnants of the Authentic (German photographic art of the 1980s) and Photography in the Weimar Republic.

The work shown was not confined to two-dimensional pictures on walls: semi-sculptural pieces were included and there were installations by artists such as Andrea Fisher, Helen Underwood and Marysia Lewandowska. Film, video, dance, music, poetry and performance were also presented in the gallery.

The Darkroom continued its popular Beginners’ Workshops and diversified into themed workshops (for example Self Image, Telling Tales, Landscape), Open Evenings and discussions, children’s workshops, colour work, tape-slide work, teachers’ workshops and video production. The workshops helped to maintain the Darkroom’s connections with the Cambridge community, as did exhibitions such as the ‘Ditton Fields Project‘, work from the Cambridgeshire College of Arts and Technology and small exhibitions on the stairway by local artists.

In August 1986, Pavel Büchler resigned as Co-Director to pursue his own work and very soon to take up a teaching post in Glasgow. In only two years the Darkroom had established its reputation as an innovative and dynamic gallery, and was now self-sustaining – albeit still reliant on grant-aid and public subsidy. After five years of intense dedication to his role as Gallery Director, Mark Lumley left in October 1989. Carola Rush, the Education Officer, took over the by now well-established facility as Acting Director.