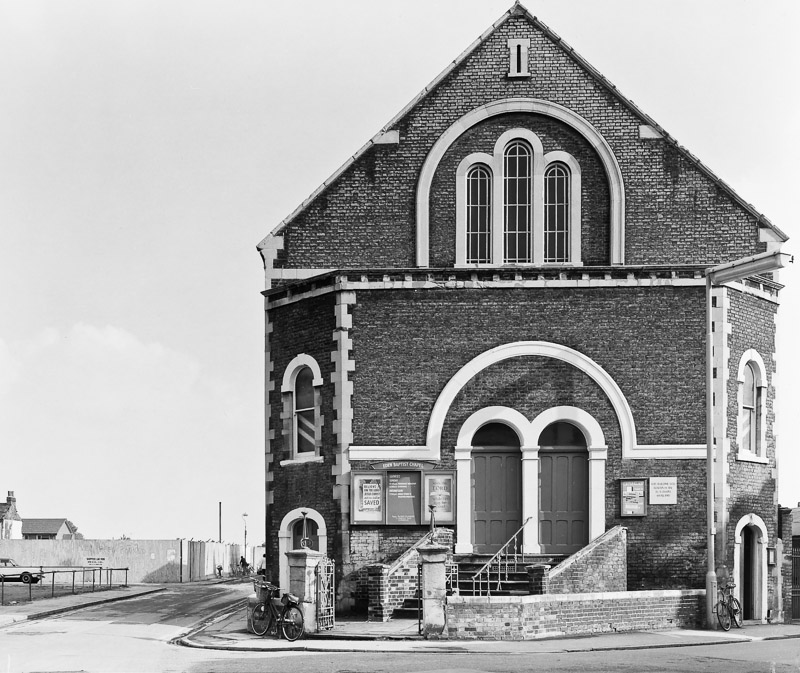 The Old Eden Chapel on the corner of Fitzroy Street and Burleigh Street.

This work was featured in a Cambridge News article in 2013.

A book featuring this work, together with that of photographer David Stephenson, is available from the site author or direct from Blurb.

During the 1980s I worked on a personal project to document some of the ‘Kite Area’ of Cambridge, so-called because on a map its boundaries formed a kite shape. The area was bounded by East Road, Newmarket Road, Maids Causeway, Short Street, Emmanuel Road, Parker Street and Parkside.

I lived just on its boundary and it was within easy walking distance, even carrying my 5×4 camera. Everything I photographed there was, of course, on film, and all in black & white. I wish now that I had been much more thorough in my coverage, as by the time I started a lot of it had been demolished already to make way for the Grafton Centre development.

The story behind this – and some very useful information about the area generally – may be found on Dr Ian Kitching’s excellent (if somewhat old) pages. There are also some historic photos on Simon_K’s Flickr pages.

All of the photographs shown here are scans of silver prints. Many have been exhibited at various times and copies may be had by dropping me a line.